The 1s had another good season, finishing second in Women’s Midlands League D1 for the third year in a row. 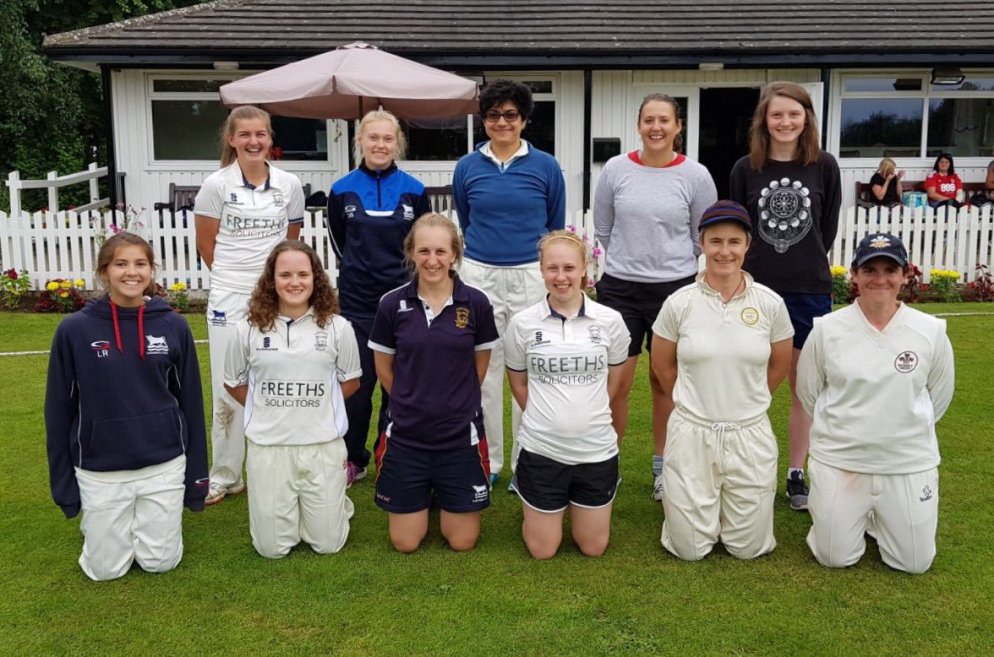 This season  really showcased the depth of the women’s side of the club, with 28 players featuring in the 1s in 2017! A number of younger players were called up and performed extremely well in their debut season for the 1s, impressing with their solid performances batting and bowling. Two of our stalwarts headed our leaderboards. Emilia Bartram topped the wicket takers, with 16 wickets at an average of 9. Vice-captain (and often full captain!) Genny Porter scored the most runs over the season, with 125. As always, playing in the 1s has been the highlight of my summer, with lots of camaraderie, delicious teas, and great cricket. I would like to thank the players, their families, officials, and club members who make playing for Oxford such an enjoyable experience. Ellie Bath.

After showing that we could be competitive in the division, the 2s were pipped into 3rd place in Women’s Midlands League D4 South.

Top performers with the bat were Numa Shah and Tammy Mattinson, who averaged 136 and 52 respectively, plus the captain’s 122* vs Westbury. It was great to regularly toss the ball to Lily Priscott, our top wicket-taker, to open the bowling, and a number of our bowlers averaged in the tens and below. In a season when we didn’t always have 11 players, I was glad that Camilla Charles and Ros Porter were available for nearly every game. I’d also like to massively thank  everyone who borrowed kit to help us out at short notice – in the end, 48 players represented our two teams on Sundays. The focus on positivity, enjoyment and fun, while playing to win, was the biggest highlight, and I’d like to thank all of the players, parents and partners who made this possible. Heather Lang.

We also had a team in the Women’s Midweek League, the Kites, playing on a Tuesday evening throughout May and June when the weather allowed! This culminated with a great Finals Day at Charlbury CC at the end of June.

We played a number of friendly fixtures against Langford Ladies, Thame Ladies and a touring side from France, Nantes Ladies. All played in a friendly but competitive spirit and were a great success.

Following a very successful softball cricket course run for women on a Friday evening alongside the Youth training, OxCC Women entered the Harriers in the softball Tournament at Banbury CC in August, which they won!

We organised a very successful Bring and Share Supper at Jordan Hill to celebrate the end of the Women’s season. It was an opportunity to say thank you to the many people who support the women’s sides throughout the season including the coaches, umpires and scorers.

Supporting the club – give something back

We always welcome volunteers whether they are players or non-players.

There are a number of ECB courses on offer which enable you to support the club.

If anyone is interested in taking one of these courses then please email the club account oxfordccwomen@gmail.com.

Dates for your diary

This is a joint event with both the Men and the Women’s sides to celebrate the club’s 2017 season. We look forward to seeing players and their families at this event.

Please arrive between 7-7.30pm in the bar for a pre-dinner drink, with food to be served from 8pm in the main hall consisting of a 3 course carribean style buffet as follows:

The dress code will be smart/casual – please don’t wear your whites. Presentations will begin shortly after the food.

Tickets are available to purchase via clubpay through this page.

Details will be emailed out to all members and will be announce on the club social media sites. If you know of anyone who is interested in playing for us next season, do get in touch via the club email account: oxfordccwomen@gmail.com.